Tom Rooney’s comedy takes its title from the name of a cocktail created by one of its characters; but it’s obvious the playwright intends us to associate the title with the 2 protagonists as well.  And they certainly are idiots.

Phil & Carl decide that the ladder to success at the post office is missing a few rungs. So they quit their PO jobs and that very day, before they turn in their uniforms, they sign a 10 year lease on a restaurant in NYC.  Backed financially by a huge loan from a mob boss, they are scheduled to open in less than three weeks, and they have already waded through all of the money.  They also, for some reason, never lock the doors of their building.

Zippy’s, a popular crosstown hot spot, has been crowded ever since Cy Manamalancia, a notorious mobster, was shot there over 20 years before.  WHAT IF SOMEONE COULD BE MURDERED IN THEIR RESTAURANT?  What follows is a fast-paced, farce filled with wacky characters & events.  Winner of the American Comedy Award.

Carl – (M) in his 30s…a regular guy…seems slightly naïve and thick-headed..but sharper than he appears.  He is willing, although somewhat blindly, to go into the restaurant business with Phil.

Phil – (M) in his 30s… definitely the dominant male of the twosome.  He is a lot like Carl in that he is naïve about the restaurant business..he has the larger ego and is the idea guy.  Believes the business is simple and they will be rich in no time.  He runs on desperation and often his ideas are lame-brained but at the same time possibly brilliant.

Task - (M or F) Mature as a cop…middle-aged..He is the Cliff Claven of the force.  Stereotyped as a know-it-all.  He is an exaggeration and has a thing for Bernadette.

Eugene(M) aspiring actor who is waiting tables until he gets his BIG break   He is haughty and arrogant and will do anything for his acting career.   But he is likable and overwhelmed by Kyle Wagner.

Ernesto - (M) in the country illegally who has migrated from Mexico but maintains he is from Norway…because of his status & protecting his family, he has taken a job laundering and shuffling briefcases of illegal money.  But he comes to Phil’s to bus/wait and legitimize himself.  He has a real thing for Jane Fryman.

Jay Fryman(F) youngish…has a new job at the newspaper in a variety of positions. She is attractive but ditzy.  But is she really???

Bernadette, the chef - (F)…she is hearing- challenged & does not speak but a good natural-health food chef. She is very physical and relies on pantomime  & physicality for communication.  She becomes the whistleblower…and gets her voice and hearing back.

The Singing Waitstaff – 3 actors(any M/F combo)  They need to sing together  during the play.  They are like singing narrators and set crews.  They are the glue of this inane story.

**Gender breakdown depends on who auditions

The Singing Waitstaff can be any gender combo.  They must be able to sing, move, act, dance a little.

Call Backs will be during the Sunday audition time if necessary

Auditions will be "cold" auditions--- reading from various scenes of the play.  Nothing needs to be prepared prior to auditions.  I will provide plot and character info before we begin.  I am looking for spontaneity and a strong sense of comic timing.  I will also be looking at groupings and how each character plays off and reacts to others and the situations in which they find themselves.  Physicality is a strong issue as this play is comedic farce and requires a wide range of movement.   Bernadette, the chef, does not speak until the very end of the play.  Much of what she does is conveyed through face, gestures, posture, overall actions and reactions.

A trio of singers/actors, posing as waitstaff, will tie the play together with their own roles as  narrators who editorialize and react to certain events within the play itself.  They also must be able to sing, possibly a capella, parodies with lyrics germane to the story throughout the play.  They are not in the original production but will hopefully add a fun, tongue-in-cheek quality to the antics on stage.  For auditions, you will be asked to sing and perhaps do a brief improv with others auditioners.

You will be asked to fill out a form listing your possible rehearsal/performance conflicts and additional experience info.  If you audition, please make sure you can stay at least half of the audition time. 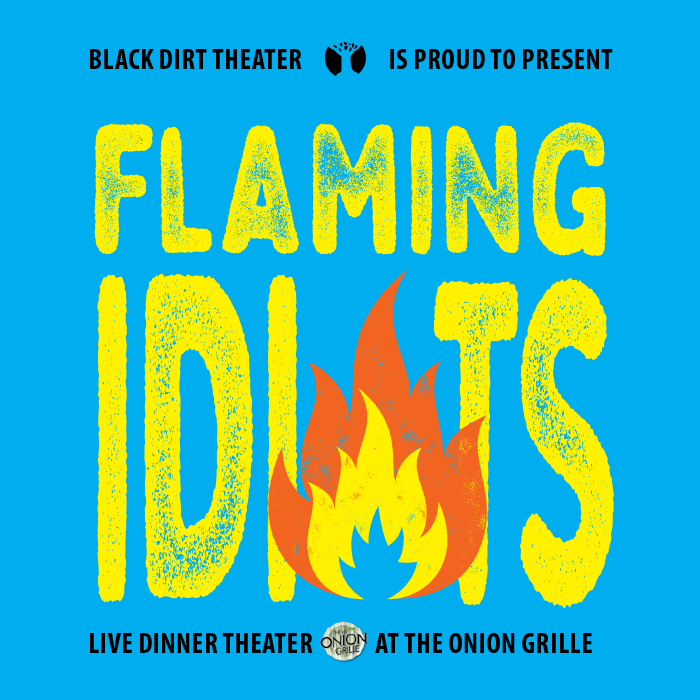