The Gilbert & Sullivan Very Light Opera Company will hold auditions for its March – April 2023 production of Gilbert and Sullivan’s The Sorcerer on Sunday, December 4th, from 6:00 to 9:00 pm, and Monday, December 5th, 7:00 to 10 pm.

This production will be directed by Gary Briggle, with Music Direction by Dr. Randal Buikema.

The Gilbert & Sullivan Very Light Opera Company welcomes and strongly encourages people of all races, identities, and backgrounds to audition. We believe that our shows are brought to life when the stories unfold onstage within a fully realized community, with both lead and chorus characters having distinct identities and relationships.

Those conducting auditions will be fully vaccinated for COVID-19.

We require all those auditioning to have completed an initial COVID-19 vaccination series, plus a minimum of two boosters, at least two weeks before participating in the production in any capacity. An initial vaccination series is both doses in a two dose vaccination series, of the Pfizer or Moderna vaccines, or a single-dose vaccine, of the Johnson & Johnson’s Janssen vaccine. The boosters may be of any of the available vaccines.

The company’s current COVID-19 Health and Safety Plan can be viewed on our website. These protocols will be updated in January based on conditions at that time.

The Sorcerer tells the story of a wealthy young man, Alexis, who believes love should level all societal ranks and social distinctions.  In order to make his beliefs a reality, he hires John Wellington Wells, the proprietor of J. W. Wells & Co., Family Sorcerers, to put a love potion into the tea served to everyone in the village at a party celebrating Alexis’ engagement to his beloved Aline.  The love potion causes everyone to fall madly in love with the first person they see. This results in the pairing of comically mismatched couples as well as some very troublesome unforeseen results. In the end, a sacrifice must be made to break the spell.

Roles in The Sorcerer

While approximately a third of the ensemble is already filled by performers who are company members, the remaining ensemble vacancies, all voices, will be filled through these auditions.

When you submit for an audition appointment, you will be prompted to submit your performance resume as well as your head shot or another good photo of yourself.

We prefer that you audition with a song or aria in English, but other languages are acceptable. Your selection may be an opera or operetta piece, a Gilbert and Sullivan song, a show tune, etc. No pop or rock music please.

An accompanist will be provided. We strongly recommend that all those auditioning prepare an accompanied piece rather than something unaccompanied.

You do not need to prepare a monologue. The Directors may provide you with sides during your audition. If they do so, you will rehearse the sides privately with others who are auditioning and then present to the Directors.

Most of those being considered for a named role in the production will be asked to return to Call Backs, which will be held on Tuesday, December 6th starting at 7:00 pm. You will be notified via email on Monday, December 5th, after auditions have been completed, if you are being called back.

You will be notified for which role or roles you’ll be asked to read and sing. Sides will be provided at Call Backs. The music and sides that will be used for specific roles will be available on this page in the near future.

We will call those being offered principal roles first. They are given a limited amount of time to accept or decline the offer before the offer will go to the next candidate. After the principal roles have been filled, those being offered Ensemble roles will be called. Finally, we will notify via email those whom we are unable to cast. This process may take up to two weeks, but everyone who auditions will be called or notified via email.

Individual principal cast members and the ensemble will called for specific days and times, as determined by the Directors as they set and continually update the rehearsal calendar.

Performances will take place with a 14-show production schedule, including the Preview Performance.

The performance schedule is as follows: 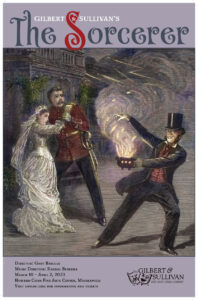