THE survey on the arts in MN

If you didn’t know it already, Minnesota has a special relationship with theater.

The recent Creative Minnesota study has a lot of interesting angles about the arts in Minnesota, and you can find a number of surprising (maybe not so surprising?) things about theater in the research:

WHAT IS THE THEATER WING OF MINNESOTA’S ARTISTS AND CREATIVE WORKERS?

Creative Minnesota studied the impact of 41 creative occupations on Minnesota’s economy. These creative occupations included many specific to theater, including set and exhibition designers, actors, producers and directors, dancers, choreographers, music directors and composers, musicians and singers, writers and authors, audio and video equipment technicians, sound engineering technicians, and theatrical and performance makeup artists among others. The look at occupations did not differentiate between for-profit or non-profit workplaces.

THE TWIN CITIES IS A NATIONAL THEATER HUB 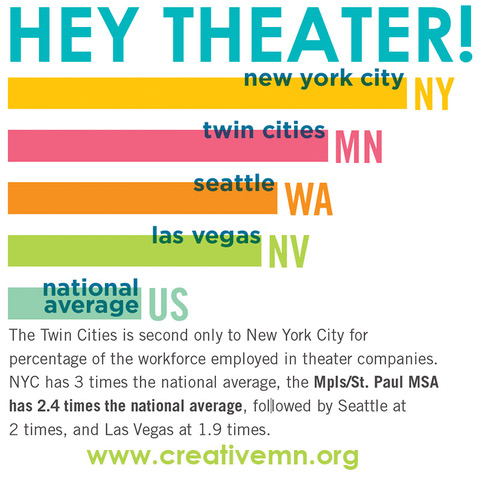 Creative Minnesota also conducted a statewide survey of Minnesota’s artists and creative workers. The most interesting finding is that the younger an artist is, the more likely they are to practice theater as opposed to the visual arts. Millennials are the only generation that chose theater as their primary artistic discipline, most often.

WHO WORKS FULL-TIME AT THEIR ART?

Interestingly, theater artists were much more likely to report that they were full-time artists (34%) compared to other artistic disciplines. (The remaining 43% of theater artists reported being part-time, and 23% reported that they were hobbyists, students, or retired). This was much higher than the 24% of artists of all other disciplines who reported working full-time in their artistic field. For example, only 15% of writers reported working full-time as writers. 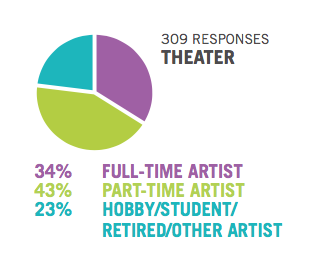 WITH SO MANY WORKING PART-TIME AS THEATER ARTISTS, HOWEVER, INCOMES FROM THEATER WERE NOT HIGH:

Theater artists were mid-range among all artistic disciplines in terms of reported average income. Including both part-time and full-time theater artists (in all the above occupations), they are on average making $10,797 from their art, with $22,472 in earnings from other occupations, for a total average income of $33,269.

Download the full report to see how actors and other artists compare at www.creativeMN.org.

THE REST OF THE REPORT (as reported in Minnpost):

A recent report from Creative Minnesota highlights the positive impact being made by artists and creative workers. The study found that every region of the state has a robust arts economy, from the prairies of southwest Minnesota to the busy Twin Cities area to the tourist magnet that is the North Shore. The combined annual economic impact of nonprofit arts organizations, their audiences, and artists and creative workers statewide is over $2 billion, making Minnesota’s arts economy double the size of Wisconsin’s even though we have roughly the same population. (It is ten and a half times that of Kansas, and twelve and a half times that of South Dakota).

Clearly, if you are a young creative person looking for a job in a creative field in the Midwest, you should load up your car and move to Minnesota.

Multiple surveys show the unique relationship of Minnesotans to the arts. Minnesotans strongly believe that the arts and culture are important to their quality of life, and, on average, Minnesotans attend and participate in the arts more often than other Americans. Compared to the average American, Minnesotans are eight percent more likely to attend arts and culture events and 14 percent more likely to be personally involved in creative activity in their everyday life. Ninety-one percent of Minnesotans believe that people who create art are contributing something important to their communities, and 90 percent believe that arts and culture activities help make Minnesota an attractive place to live and work. Most also believe it is important to have the opportunity to express themselves creatively or to experience the creativity of others every day. These numbers help explain why Minnesotans consider the arts to be crucial to the state’s quality of life.

High levels of activity by artists and arts and culture organizations also bring added benefits to the state’s budget. Artists and nonprofit arts and culture organizations spend money in their communities by hiring people, renting studio space and buying supplies at the hardware store. State and local government revenue from this spending in the form of income and sales taxes exceeded $222 million a year in 2014. That is over five times the amount that the arts received in public funding.

Minnesota’s arts and culture organizations also provide 3.8 million K-12 students with cultural experiences, hosting 29,318 school group visits each year. With approximately 900,000 K-12 students in Minnesota, on average every student is participating four times a year in arts and culture activities, many of them for free, provided by these nonprofits because of funding from the Legacy Amendment. (Minnesotans passed the Legacy Amendment in 2008, creating dedicated state funding for the arts and environment).

An astonishing 104,000 people work as artists and creative workers in Minnesota. Twenty-four percent of self-identified artists are employed full time as artists; 42 percent are part time; and the rest, 34 percent, are retired, hobbyists or students. About 70 percent of these people live in the Metro area. It’s important to note that artists live in every corner of the state, however, and while there are of course high density clusters of creative workers in Hennepin and Ramsey counties, Benton, Carver, Cass, Cook, Martin and Marshall counties also had high densities of creative workers.

The arts and culture industry in Minnesota is growing, but there are still reasons for concern and work for us to do. For example, Creative Minnesota 2017 found that women and artists of color make less from their work than other artists, mirroring wage disparities in the larger workforce.

A recent Minnesota State Arts Board survey found that there are five things that artists need to help them be more successful making a living as a creative worker:

Despite these needs, 85 percent of arts graduates say that the Twin Cities is a “Good” or “Very Good” place to be an artist. Being an attractive place for creative workers is great for Minnesota’s future, because in addition to being part of many growing industries, artists are very civically engaged. Artists and arts advocates give back to their communities more than the average American. Eighty-eight percent of artists volunteer their time to community activities and events. That compares to 35 percent of all Minnesotans and 25 percent of all Americans who volunteer time for their local communities.

For more information, the statewide Creative Minnesota 2017 report as well as 11 new regional studies can be downloaded for free at www.CreativeMN.org, where you can also find the study’s data sources.

Creative Minnesota is a collaborative project of the state’s arts supporting organizations in partnership with Minnesota Citizens for the Arts (MCA) www.artsMN.org. The Creative Minnesota Team includes MCA, The McKnight, Jerome, Bush, and Mardag foundations, Target, the Minnesota State Arts Board and Forum of Regional Arts Councils of Minnesota, Springboard for the Arts, The Minnesota Theater Alliance, with in-kind support from the Center for Urban and Rural Affairs at the U of M, Ideas that Kick, City of Minneapolis and others.

Sheila M. Smith has been Minnesota Citizens for the Arts' Executive Director since 1996. She was a leader in the 2008 “Vote Yes” campaign, passing a Minnesota state constitutional amendment to create 25 years of dedicated funding for the arts and environment. Smith has been Chair of the State Arts Action League, part of Americans for the Arts, and was recipient of the 2009 Alene Valkanas State Arts Advocacy Award, which honors an individual who has dramatically affected the political landscape through arts advocacy efforts at the state level.