NC: Tell me a bit about your background in playwriting and directing?

TS: My father is the first writer I met. He is a guitarist and songwriter. He’d pace through the house writing lyrics in journals, and naturally I imitated him and discovered my voice as a poet. Both my parents are musicians who encourage creativity in their children.

Upon graduating from high school, I decided to major in journalism because of my obsession with print media. We were coming out of the 90’s and still in an era of the magazine. My mother owned a hair salon the first dozen or so years of my life where I regularly consumed Ebony & Jet and Essence to name a few. I was attracted to the careers of editors like Susan Taylor and John and Eunice Johnson and even started my own newsletter in the salon. In the newsletter, I’d adapt conversations I overheard in the salon into comic strips and sell the clientele back their own gossip. It was a hit! This is how I learned I could earn money from writing stories.

Fastforward, I started to study and consider playwriting professionally at age 17 after reading a play called Fences by August Wilson in a Modern Drama course at Delaware State University (DSU). I was drawn to the character Cory Maxson who, like me, was a recent high school graduate trying to find himself in the shadow of his father. Studying Wilson’s biography provided a blueprint for what would become my professional trajectory as a creative writer. DSU had a minor in theatre and an intimate theatre/ dance troupe where we produced everything from the musical Dreamgirls to Pearl Cleage’s Flyin’ West to an Ebony Fashion Fair when it came through Dover.  This is where I learned how to work various jobs in the theater: lighting, interviewing cast and creating playbills, assistant director, etc. I was also given the opportunity to write, direct, and produce my first play as part of my senior project. Which is hard to forget because it premiered the weekend of Obama’s first presidential election. While my first play is in a VAULT never to see the light of day as long as I am alive, its success sparked a light in me to self-produce and pursue higher education in dramatic writing.

NC: What brought you to Minneapolis?

TS: In 2019 I was awarded a Jerome Fellowship at the Playwrights’ Center here in Minneapolis. I received the same award in 2020.

NC: What are some differences you’ve seen moving here from the east coast?  People, atmosphere, etc?

TS: Right, I moved to Minneapolis by way of Brooklyn, NY. It feels like I landed in sort of a university town because I live so close to a university. So there is foot-traffic, but less of it! Brooklyn is densely populated.

NC: What was your reaction to the killing of George Floyd?

TS: I refused to watch the video.

My neighbor, who is a native Minnesotan, took me to the protests, and we’d walk through the city after the nightly looting and arson. It is important to note that these events were like day and night. Literally.

NC: As a person of color, can you relate to what’s going on in south Minneapolis between the police and it’s residents?  If so, how?

TS: Well, I come from a small community called Plainfield, New Jersey where police look like me. My classmates are officers in my hometown. And growing up, my parents’ classmates were officers. Conflict tends to rise between officers and residents when communities are policed by officers from surrounding areas who are not familiar with the people they are paid to serve. However, as a cosmopolitan, I do wrestle with the social stigma attached to racial profiling which often leads to unfavorable race relations. For example, the more I reveal about myself to a stranger across the color line, the more he or she becomes comfortable in my company. It is like having to submit a social resume to disarm biases. I admit some of this is projection, but it is also learned behavior. None of which I have been able to dichotomize.

NC: What made you decide to create a play and then a documentary about the signs in your neighborhood?

The murder of George Floyd sparked international protest during a historically polarizing time in America. Mainstream media had become unbearably partisan. And on the heels of a pandemic, and an election, it was difficult to plug into trustworthy sources of information. Naturally I turned to nature. I unplugged from the onslaught of reportage and took long walks in my neighborhood. It was summer and the weather was nice and I started to look around me and notice the bright colors, pulchritude, and solidarity of the protest signage and murals in lawns and windows and plastered across boarded-up businesses. The city was both blighted and beautiful, desolate and decadent. Thus the question raised in me: how could something so beautiful emerge from such an ugly incident? This question became the premise for my project which began as small talk with my neighbors about their signs.

The decision to film the signs and interviews came from my conviction to archive the protest-art. Which is very difficult to do in writing.

I wanted to remember the signs because the signs told a different story than those partisan media outlets. There was a deeper story I wanted to capture in images.

In addition to the documentary, I am adapting a contemporary docudrama based on the interviews I’ve conducted. It is not a verbatim drama, rather I have given myself the creative freedom to invent composite figures.

NC: What is a contemporary docudrama?

TS: A contemporary docudrama is a form of investigative theatre in which a stage-play is adapted from interviews about a current or historical event or topic. So, ultimately I am developing two projects. The docudrama is called Whittier. And the documentary is called Sign o’ the Times. They are companion pieces.

Some filmmakers are taking a direct approach to telling the story of George Floyd by filming the riots, covering the trial, but you are taking a different approach...tell me about that. I am telling a story about a community’s response to the publicly fatal arrest of George Floyd and the ensuing series of events. Images have always been significant to civil rights movements in America. Those demonstrations and marches in the 60s were only as effective as their publicity. They needed those cameras to shine a light on the horrors of Jim Crow and raise awareness about the inhumane treatment of Black women, children, and men. However, when you look at the archival footage, so much of it covers the action and infamous scenes of confrontation in the streets. Truth is, protest starts in the home long before it spills into the street. Truth is, racial bias is taught in the home long before it spills into the street. I wanted to capture the periphery of the modern civil rights movement. This is a perennial theme in my work, my creative lens zooms into the action behind the action. I am always like, yes, but who is she? No, not the fire. The woman in the background holding the fire extinguisher in her front lawn.

NC: How did you come about collaborating with Nick on the film?

TS: Nick and I were introduced by Andrew Peterson at Film North. I was gripped by the cinematography in Nick’s film the Wolf House, and the communal aspect of his film Sidewalk Sonata which sort of utilizes a piano on a sidewalk to center a community. It was about the intersection of art and community which is inherently theatrical. Those films shared the sentiments of my creative ambition. When we met I expressed my interest in conducting man on the street style interviews in my neighborhood about protest-signage and murals. The project was an embryo and really scatterbrained but I did manage to express to him that I did not just want a camera-guy following me around, but I wanted a collaborator to help me cohere the film and Nick has been a great creative partner, for sure.

NC: What is the synopsis of the film?

The film is a reflective portrait of a neighborhood facing increasingly violent civil unrest.

NC: How does the play differ from the film?

TS: Right now, both are being developed as companion pieces. But I imagine each will take on a life of its own organically.

NC: What is your goal with the play and the film?

We are deep in development but my goal is to secure like-minded distributors/producers for both.

NC: Are you hopeful for change?  How?

TS: There is certainly change on the horizon. People are embarrassed. Derek Chauvin embarrassed people who look like him. Change almost always follows shame. []

This interview, which has been updated, originally appeared in an issue of Extended Play, an online journal published by The Civilians dedicated to the intersections of contemporary theater and society, exploring creative processes, community, politics, and new innovations in storytelling. It is reprinted with permission from The Civilians and Tylie Shider. 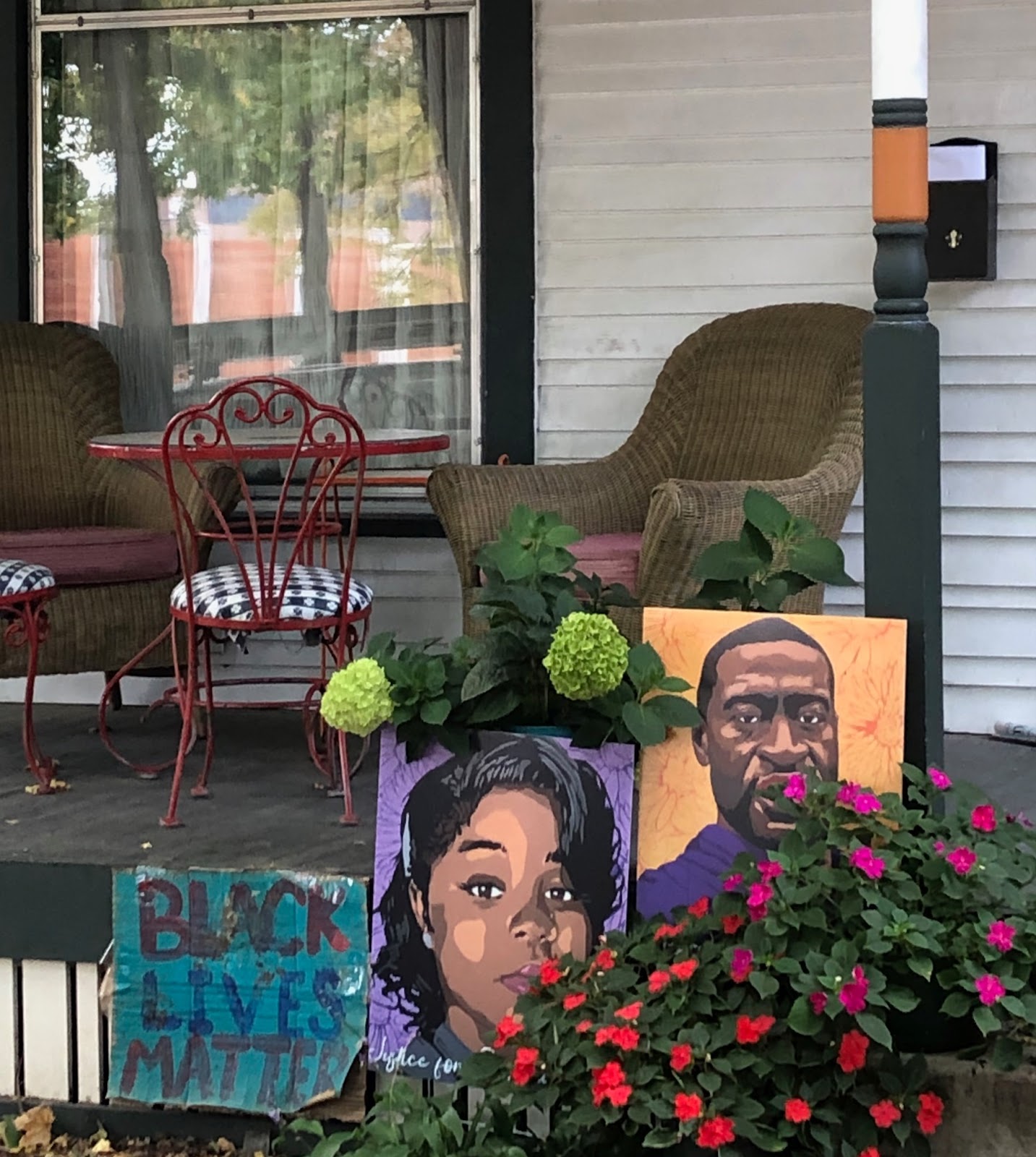