Lyssa and I met at my favorite southside see-everybody-and-they-mama spot; The Seward Friendship Co-op! We actually went to the same college but met in passing while working in the Twin Cities Theatre community. I am so happy to bring you the story of her hustle and her resiliency!

I waited for her to show up to our special meeting and as she walked down the cafeteria path way I couldn’t help but notice the joy on her face as she stared at her phone and paused in her steps. She was playing Pokemon Go!

I love that you are playing Pokemon Go can we just start and you can talk to me about Pokemon Go?

Fuck yea I can talk about Pokemon Go! The world is depressing and doing activist art stuff I feel like the hardest thing for me recently, now that I am making activism my day job too, is being able to compartmentalize. My art is activism, my day job is activism, so I need things like Pokemon Go or binge-watching Masterchef Junior otherwise I would crack and not be able to make art. Everytime you go on facebook it’s like here are all the horrible things happening and Trump is president and ‘me too’ movement; It keeps things on the surface for people who have been sexually assaulted like me. It’s hard to not have those things be really raw all the time.

I was just in a Blackout Show where we talked about the Me Too movement and I felt really down afterwards because it brought a lot of stuff up for me. It reminds me how activist artists need to take care of ourselves. . .

It’s a lot and that’s kind of what I am trying to figure out now.

Can you just like tell me about yourself? Likes, dislikes, that one thing that happened yesterday. . .

Yea totally. So one thing is I wear my sexuality very proudly now. I was closeted for a long time. My show “First Year Queer” was about me accepting myself and being radically out; Poly-Kinky-Queer Bisexual! AHH HAA! ( she exclaims because she just caught a Poke-Mon) I just won a gym battle! But yea, also I am a sexual assault advocate for day-1 services. I do solo-performances and storytelling and I am trying to get into consent education for adults. I wanna do more Kink education, consent education and sex education for adults.

What is Kink education? ( I really didn’t know)

Like BDSM which is bondage, domination. There is definitely a kink community. I think it’s super important for me because in 2016 I came out and I was super depressed; something that happened to me was I was sexually assaulted by a guy who was kinky. And since it happened in the context of kink it took me a long time to unpack that and realize that I did not consent. This is why consent is so important to me especially in the Kink world. I think being Kinky can be really fun in the way that theatre and arts can be fun and creative, but you are also trusting somebody a lot and consent needs to happen and conversations around it need to happen. I want to educate because I don’t want that to happen to anyone else, what happened to me.

That is really beautiful, I didn’t know you can be educated in that world

Yea, and I am new-ish learning about it and being in the community; so a part of my fringe show is doing education around Kink. people think “ I would never be into that, that’s 50 shades of Gray” and in my show I say “ learning Kink from 50 shades of gray is like learning how to be a chef from Ratatouille” it’s fantasy, it’s not there to teach you. I think it is a really great creative outlet for me.

So why do you create? What draws you to theatre?

I have always wanted to do Theatre; I was seven when I decided I wanted to be a performer. I was watching some documentary about who wants to be the next Annie and I was like “mom can I do that”? And she said (In a high pitched tone) “YOU CAN DO WHATEVER YOU WANT HONEY!!” and I was like “OKAY!”.

When I was in college and since graduation I have really thought about how you can use theatre arts for activism and education and for advocacy. That’s what makes me care more about theatre. I’ve had moments where I thought I didn’t want to be an actor anymore because I’ve been in plays where I didn’t care. I think “who is this helping? Why is this important or needed or is it just making us (the actors) feel really good?”. I was in a lot of shows for a while that made us (the actors) feel really good, but how can we use this to create a better world or educating or amplifying something?

AHH I love this! SO based on that, would you say there have been past companies you have worked with that are all about advocacy and education?

I have worked with Raw Sugar, Gadfly, Patrick’s Cabaret. I wish I did more for 20%, but I am not auditioning more. I don’t really audition for stuff anymore because I want to create my own work so much. I am not interested in being other people anymore. I like being myself in creative ways more than taking on another character.

Yea having that mentality almost made me quit theatre for a long time. The kind of work I get fulfillment from is creating my own work. In school I got in trouble a lot for being concerned with the “wrong” things. I’d have so many questions and people would say “That’s not your concern, that’s the director’s”. I love to follow an idea from beginning to even after the show has ended. When I was auditioning I was coming into the process so late in the game and I wasn’t getting fulfilled from the process.

For those of us drawn to work that has social impact it’s really important the effort you put in going into the work, during the work, but most importantly the lasting effect after the show has ended. . .

And that’s what interested me in theatre which means I just had to change trajectory on what success looks like to me. Which might not be flashy all the time but it is more fulfilling to me and aligns with me being a fuller person. It is hard because you have to create more of your opportunities.

Do you think Minnesota is a good place for that?

Yea I think Minnesota is a good place for funding those sorts of things. I recently joined the Minneapolis Arts Commision and Minneapolis public arts board because I wanted to know more about minnesota public arts funds and about who gets those and barriers to access.

I love all your answers! Have you ever been on a streak of not landing the gig and what have you done to take care of yourself?

Yes, for a while I was on a streak of “almosts”. I was getting called back for these bigger theatres and then not getting the job. Which was really hard, I got really depressed and in the year 2016 I just focused on myself; I came out as bisexual, non-monogamous and into the kink world and then I just became someone that people wanted to work with. Because I feel people were like “Oh I get who you are now” and before they were like “Who the fuck are you” and I’m like “I don’t know!!”. I suppressed a lot of myself. When I worked on myself and figured out who I was and what was important to me I could make art again. More people were attracted to me and wanting to work with me because they could get what I was about. 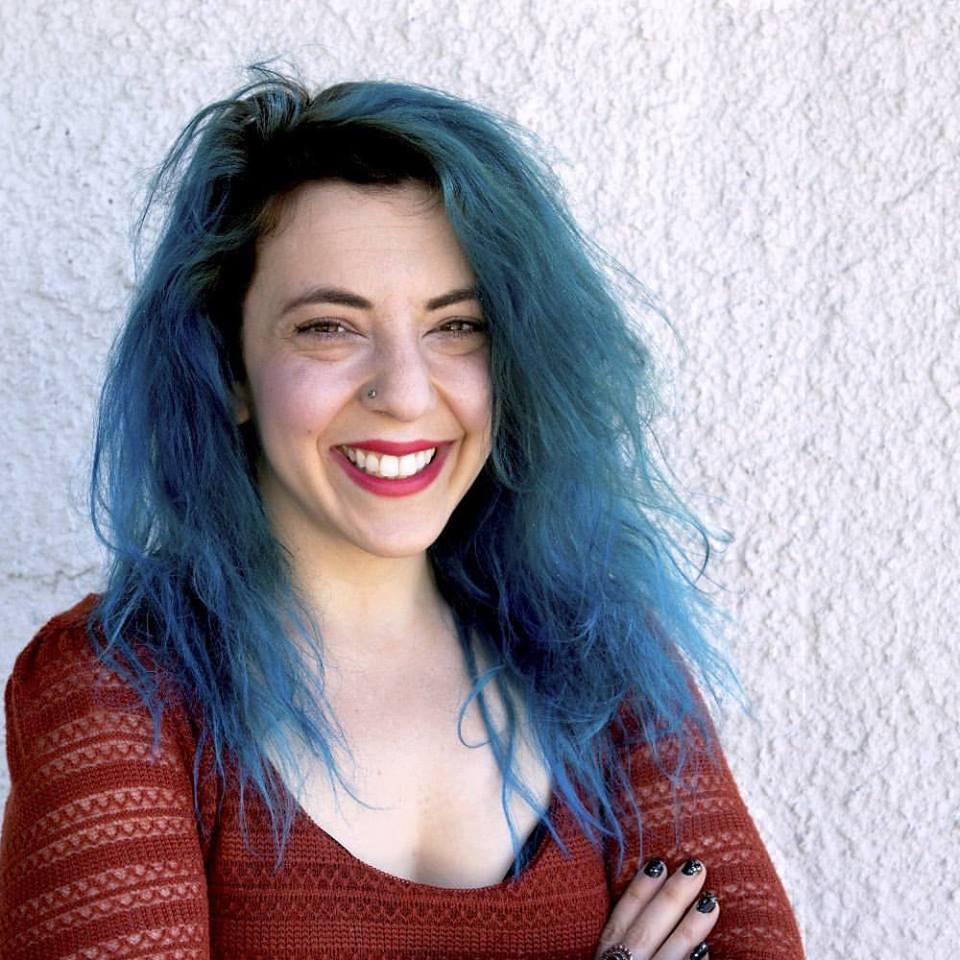 And you get empowered in yourself. A lot of times in the audition room, especially for younger performers, people compare themselves, they are not secure in themselves. . .

And people think you have to be a blank slate or neutral. I did that, I wasn’t bringing myself to the table as much. I thought I had to be pliable and I lost myself in that; trying to become the perfect idea of what an actor should be.

What is your proudest moment in your artistry?

When I did my Fringe show First Year Queer someone came up to me and said “Representation feels really good”. I want to make conversations easier to have; conversations around sexuality, consent and do that through art in fun playful and serious ways that doesn’t re-traumatize my audiences. I hope my show sparked conversations or made it easier to have conversations with people in my audience’s lives. Maybe they figured out a way to talk to their person about kink?

So you’re proud of the impact you have on your audiences?

Yea and I am always searching for ways to be more equitable in my work. My show was a solo show but I had recordings of other people sharing their stories of assault and I just needed to make sure I was representing more than the people who looked and acted like me. People that have different barriers of access than I do can relate to something in the show hopefully. I worked to make it accessible and also so it doesn’t feel like I’m talking down to anyone.

Maybe we touched on this? By why is education theatre important to you?

Well those shows I saw in high school really stuck to me. I got a lot out of them. I can process through conversation and theatre helps people understand things more fully. And the hope is that it has a ripple effect and create more conversations.

Is there anything you want me to add as we finish up?

I am honestly not creating anything currently (which bums me out) but I am looking to collaborate with people more. People can contact me on facebook, it’s what I will respond to because I am on there all the time. (laughs).

Do you have advice for people looking to create their own work for the first time?

Yea! Just do it and go to open mics and storytelling and spoken word. I’ve done things that were so awfully bad but it’s just a matter of doing it. You might mess up but it’s okay.