I’ve been a musician my whole life, and since moving to the Twin Cities in 2004 I’ve played in various theater pits, so I knew I liked being around theater people. I’m also a writer; working at the Playwrights’ Center—which activates my interests in both writing and performing arts—is a great fit. Before coming to the Playwrights’ Center in 2012, I worked at the University of Minnesota, also in communications and marketing. My bachelor’s degree was in English and creative writing, and I got a master of liberal studies a few years back (talk to me about Donna Haraway). 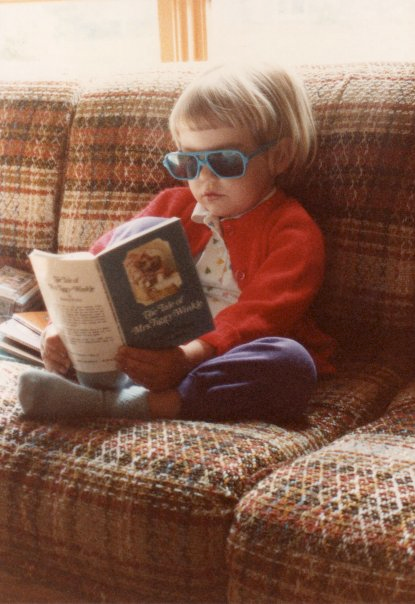 Because I grew up in music, one future I saw for myself was as a jazz musician. I also dreamt about being a veterinarian and a pilot.

But most consistently, I wanted to be a writer. Or an environmental activist. I would write and illustrate these pompous, ponderous books in which grandfather birds cry because people aren’t recycling, or forest animals reward the little vegetarian girl with gentle interspecies friendships. In elementary school I wrote a letter to the editor of the local newspaper about the disappearing rainforests. In verse.

Basically, I was Lisa Simpson without the cool haircut.

My first day of work I got to go upstairs to the theater and watch the final read-through of a new Sam Hunter play. I felt like I had won the job lottery, and that feeling hasn’t worn off. I get to be witness to a great number of readings, experiments, rehearsals, workshops, classes, and artistic conversations. I read amazing scripts and interview inspiring playwrights. I breathe art here every day, and it’s incredibly energizing.

Also, it is a true joy to spend my days surrounded by the people of the Playwrights’ Center. It’s fun to be at work. My coworkers make very good jokes, and I think we support each other in really deep, kind ways. Every day I go to our sunny garden-level church basement and play a small part in art getting made, along with some of the most delightful, dedicated people I’ve ever met. There’s like 7% too much Star Wars talk in our office, though (don’t @ me).

I did arts admin as my work study throughout college, along with serving as a piano accompanist. I won’t pretend like my career has some master plan, but I’m not surprised I found my way back here.

I was surprised to learn how frequently playwrights are not compensated for their work or time. (At the Playwrights’ Center, we pay playwrights to write and workshop their plays, and playwrights are always the highest-paid artists in the room.) I never knew how common it was in the industry for there to be a room full of theater artists working on a production and the playwright is the only person not getting paid to be there. And when playwrights are compensated, it’s often far too little. Playwrights don’t have a union in the way that screenwriters or actors or scenic artists or musicians or choreographers do. As Philip Dawkins says, “Overemployment is a must in order to make minimum wage,” which is a terrible disservice to the storytellers who are so vital to the health of our communities.

Playwright Kate Tarker has said a lot of brilliant things, but what stuck with me most is this: “Use playwriting as an excuse to lead an interesting life.” This applies to artists of any ilk. Like, if there’s a UFO conference in town, go to it! If you have an opportunity to travel somewhere, take it! Be like Mat Smart and get a job as a janitor in Antarctica, then write a beautiful play about it. Fall down a research rabbit hole in a physical library or museum archive. Talk to people whose lives don’t seem to intersect with yours. Instead of watching Netflix tonight, find a class on something you would never take a class on, or join a game of pickup basketball at the park/community center, or find a random kids’ violin recital to attend. Instead of eating lunch at your desk, go to a community meal in your neighborhood and ask strangers about their lives. Doing interesting things makes your art more interesting.

I’ve found it so much easier to be brave—and social—when I’m doing it for a possible story. Being an artist is like having a press pass for the world around you. You’ll find that people are mostly very willing to invite you into their lives or jobs if you tell them you’re researching a play. And even if you spend two weeks job-shadowing a roadkill crew then end up not writing a play about roadkill crews, wasn’t it still more interesting than not doing it? Was that possibly not the best example?

Literally any three stage managers. After we’ve washed ashore and I’m still hacking seawater from my lungs, they will already be walking around with palm-bark clipboards and fully functional coconut headsets saying, “We can make this work,” and meaning it.

Cross-training is important in nonprofit work. Whenever you have the opportunity to pick up a new skill, even if it’s not directly related to your current work, take it (if you have the time). Most arts and nonprofit workers I know have many different parts of their jobs, and must be more generalists than specialists. Having at least a little bit of knowledge about lots of different things will make you better at your job and also help you understand what your coworkers might need from you or how you can better support them.

Also, build a solid base of writing and editing skills. Even if you don’t plan on going into communications, being a comfortable and competent writer who knows which “its” to use will take you far.